mozilla new game button loses city control but doesn't remove city and makes it so you cant make a new one. on reload fails to load .pck cant be found

hey, thanks for letting me know. I’m on holiday but I’ll look into it when back.

The city not being removed on new game bug should be fixed now. The reload pck file not found I can't reproduce, if it's still a problem a screenshot would help. I encountered some issues with saving on firefox but these seem to be due to browser settings.

Tnx for the feedback! I'm working on both those problems :) I don't think I will have shipping of resources but I want to make them valuable in another way.

love this game, definately belongs on steam even at early access

That's really awesome to hear. Thanks! If it ever gets that far I'll let you know! I think it needs a lot more content after you complete the first town.

It appears that worker counts are increasing by two in at least some cases.

Feedback:
Might be interesting if you could set up caravan trade routes between the cities.

This starts to feel like an older game I used to play called Evony [NOT the mobile game with a very similar name and likely same developer].  I'm not sure if you're considering a combat type mechanic, but as a building resource game goes... it quickly loses its appeal after the first city.  At least in its current state I lost interest when I saw that there was no way to share resources.
It does allow for the first city you make to continually send out expeditions around it, but you can only build a city where the expedition seems to land.  And you can't send an expedition to target a piece of land that is already revealed.  I'm currently testing to see if they can cross over a discovered plot of land far enough away from the initial city to plan a city enroute.  The experiment failed, though it did reveal more map tiles... which couldn't be built on at all.  No idea why.  There needs to be some kind of mechanism to give the player feedback on where and how they can build cities.

The game starts with an idea that a balanced utilization is going to be ideal.  Wood is only useful for upgrades, and overbuilding on wood production becomes apparent once you've purchased all the available upgrades in the city.  At that point the only purpose of production is be able to send out more tendrils and to maximize food so then we can maximize gold output (which also means careful selection of which upgrades to use on a given tile.

Having another layer of zoom to see where your other cities are might prove helpful as you have to keep clicking the arrow to move square by square... something to help in the navigation between city interfaces.

Thanks for the feedback and bug report! I'll add the bug to my (sadly growing) list of bugs to look into and fix. I'm really surprised at how many people played this game and also at the amount of bugs that pop up as soon as other people start playing.

Regarding the feedback. You're right that there's not much to do after you complete your first city. I really wanted to first get these basics right and now start to focus on the next steps: exploration and multiple cities and making that part of the game interesting. It's really still a prototype. But trade routes do sound interesting. One of the other ideas is also that cities basically become gold generators (this resource is shared) so you don't want to invest too much in the production of other resources more than you need to get your gold up.

How exploration currently should work is that you should be able to found a new city on any revealed tile that is at least 4 tiles away from an existing city. I understand now from multiple people that this mechanic is unclear. And when I read your findings it also seems possibly bugged. I'll try to improve this part of the game soon.

Hi there! Liking the game so far...it's a really fun interesting concept. I definitely like that there's a bit more of a strategic element involved, which you don't see as often with idle games.

There are a few things however that I've come across that I'm not sure if they're bugs or intended:

Thank you for your feedback. Glad you like the concept! It's still in early stages but it's good to know if the core of the game works.

The first bug you mention was pretty serious and strangely you're the first to mention it. I've immediately fixed it. The tile should be selectable again. The other 2 probably also are bugs, but I need some more time to look into them and fix them. Thanks again for pointing these out.

is it intended that resources of one city are not connected to another city?

Yes. Cities have their own resources. Only gold is shared. This way every city has to be build from the ground up.

Good question though, this should be communicated better by the game.

I don't want to be to negative about the game but this shit is straight bullshit
Edit: It's hard to read but the number is 10mil* 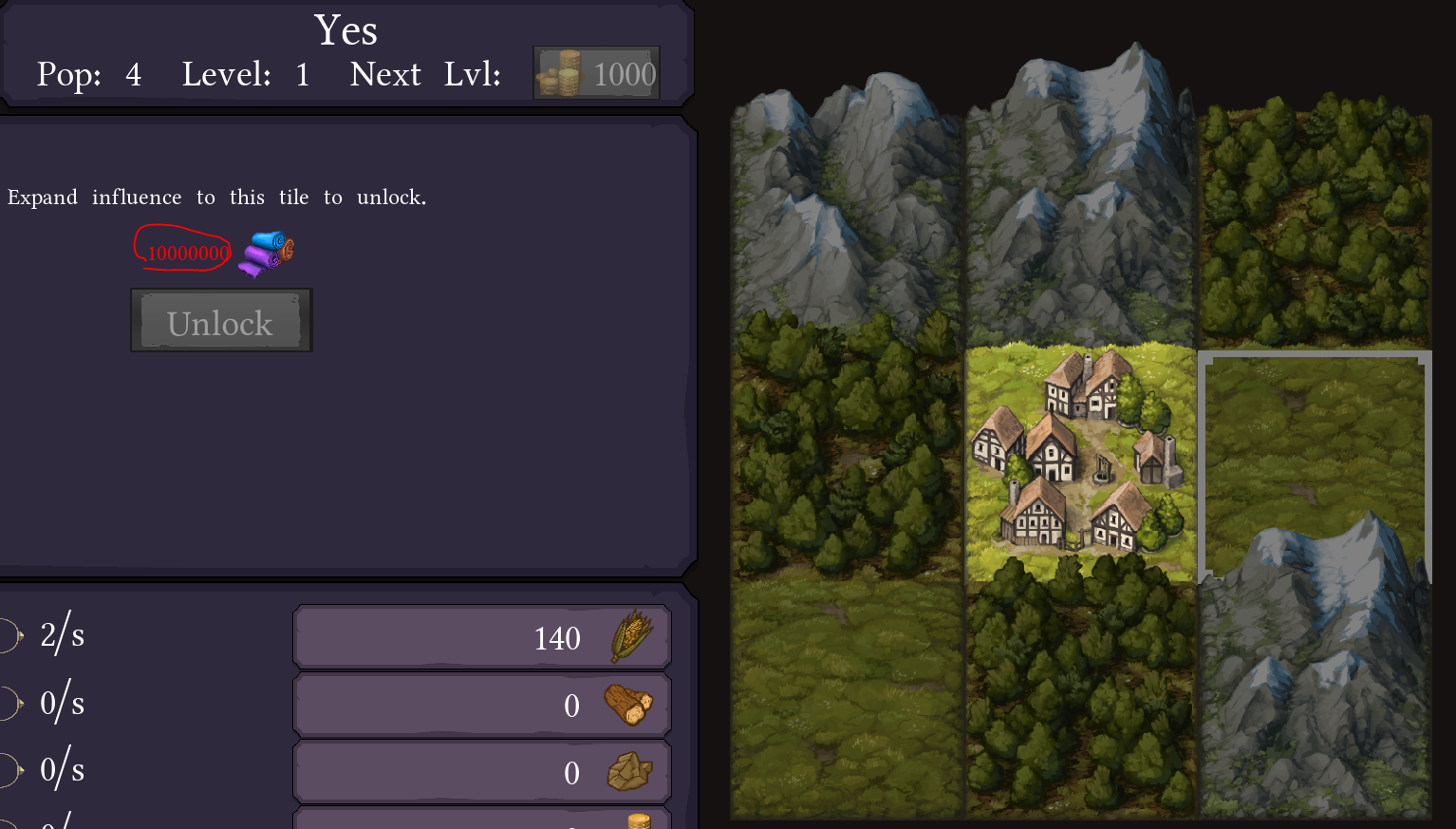 Hey. That is a bug. Thanks for letting me know and yes that seems way to much.

so i've done an expedition, the timer went away, it appears it has finished now since i can send another expidition...but what can i do with the expedition i've done? all my plots are maxed (the 9 you start with, there is nothing i can do or upgrade now except waiting for food to buy people)

I do realise now this should be communicated way clearer to players.

This is just a prototype but what I want to add next is more different tiles and lands to explore that add new possibilities for cities founded later in the game. For now exploring is not that exciting.

I'm sorry to hear that! Do you have more info? Did you play in the browser and if so which browser?

I'd like to fix this but would need a bit more info. Do you play in the browser and if so which one? Sometimes saving data can be blocked by the browser settings.

@sdwr & @ BlindSidedGames. Thanks for the feedback. It seems a failed export was pushed. It should be fixed now! If now please let me know. Thanks!

Putting in the name Warrawong for my first city broke the game, it crashed in both browser and after downloading it